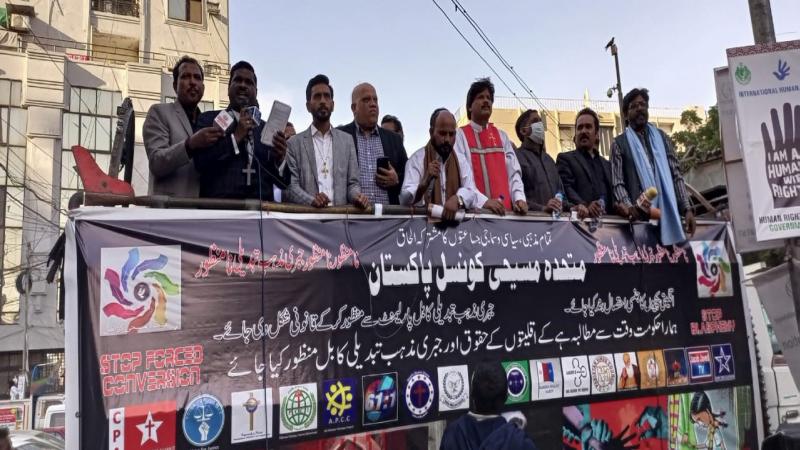 On 10 December, International Human Rights Day, Pakistani minorities held protests in several cities against the ongoing forced conversion of Christian and Hindu minors to Islam.
A huge number of people joined protests carrying placards with several slogans, with “stop the kidnapping, rape and forced conversion of Christian girls in Pakistan” dominating.
Several Christian organisations also held seminars and press conferences regarding the issue.
Christian activists Lala Robin Daniel from Faisalabad held a press conference with Madam Tahira Anjum and several other Christian leaders, expressing his grave concern over the ongoing forced conversion of minority girls. He criticised the government and other institutions and said courts are biased.
Voice for Justice (VFJ) held protests in various cities of Pakistan including Karachi, Lahore, Islamabad, Sahiwal, Faisalabad, Vehari and Multan against the forced conversion. They shouted slogans against violent extremism and religious persecution and expressed concerns about the dismal situation of religious freedom and minority rights in Pakistan
VFJ called for the urgent attention of the government, state institutions, and religious groups to the brunt that religious minorities face.
VFJ leaders demand that Pakistan’s federal and provincial governments introduce, pass and enact comprehensive laws against forced conversion.
Voice for Justice chairman Joseph Jansen said the imposition of the religious ideology of Muslims on Non-Muslim citizens while introducing laws and policies, is a highly discriminatory act by the government. The hiding of Prime Minister Imran Khan’s government behind Islamic values to prevent legislation against forced conversion and brushing aside a pressing human rights concern as a non-issue has damaged Pakistan’s reputation, he said.
He also raised serious concerns over the non-consideration of the Prohibition of Forced Conversions Bill, 2021 for further deliberation and amendments by the parliamentary committee, ignoring the facts on the ground as well as the judgments given by the courts of Pakistan which have declared the practice of forced conversions against the right to religious freedom.
They have ruled that minor children lack the legal capacity to enter into marriages and to change religion on their own.
Ashiknaz Khokhar, a human rights activist, observed that the delay in enacting a law against forced conversions is a failure of the legislature, while the impunity enjoyed by the perpetrators against their crimes under the pretence of faith conversions and marriages is the failure of the law and justice system.
Napoleon Qayyum, Executive Director of Pak Law and Justice Centre (PCLJ) said that the Pakistani courts mostly issue verdicts in favour of perpetrators who manipulate the legal procedures by presenting forged certificates of marriage and conversion, stating the girl is an adult who and marrying and converting to Islam of her own free will. Because of the pressure and threats, girls have no choice but to give such statements. But it is the responsibility of judges to make their decisions according to the law and not religious influence.
Mansoor Randhawa, politician and director of VFJ Islamabad, said that forced faith conversions are grave human rights abuses which violate the religious freedom guaranteed in the constitution of Pakistan and international human rights instruments. Therefore, the government should also ensure that complaints of forced conversions are promptly investigated, the perpetrators apprehended and the victims provided access to a fair trial.
Bishop Johnson Robert said that a lack of legal safeguards and their implementation against child marriages and forced conversions has the result of placing female children from minority communities at higher risk of facing violence and abuse and poses a serious threat to their right to education, health, work, and religious freedom. The adverse consequences of this, he noted, extend to society at large.
Maisha Foundation and several other Christian organisations including Pakistan Minority Rights Council held protests against the rejection of the forcible conversion bill in front of the Press Club, Sialkot.
Several political, social and religious leaders including Javed Gul and journalist Emmanuel Nawab addressed the gathering and called forcible conversion a form of religious terrorism.
Pastor Nadeem Ghauri, Elon George, Griffin Khokhar, Elias Gul Jamshed Sutra , Prof. Raj Bhatti, Dr. Gulfam and other Christian leaders demanded that the government play its role in providing protection to minority girls.
The Tolerance Movement of Pakistan expressed solidarity with the religious minorities, forced conversion, misuse of blasphemy laws, the brutal murder of Priya Natha Kumara in Sialkot and other issues.
Samson Salamat, Chairman Tolerance Movement, while addressing the rally, offered condolences to the family of Priyantha Kumara, a Sri Lankan citizen who was killed by a mob in Sialkot on false charges of blasphemy and to the people and government of Sri Lanka and the Pakistani people for this brutal murder.
He demanded that the killers of Par or Natha Kumara be punished in accordance with the law and that concrete steps be taken to curb provocation and killings under the guise of false blasphemy charges.
Samson Salamat expressed grave concern over religious discrimination and inequality with minorities, hate speech trends and the persistent conversion of Hindu and Christian teenage girls, and called on the federal and provincial governments to prevent forced conversions.
He announced that if the government did not take serious action to stop the forcible conversion and the bill was not introduced in parliament, the scope of the protest would be widened and sit-ins and hunger strike camps would be set up across the country.