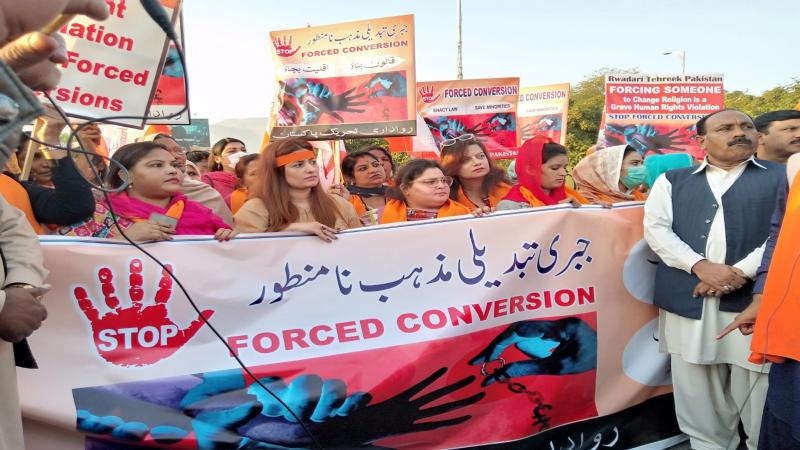 On  13th November, Rawadari Tehreek held a protest in Islamabad against the parliamentary committee for the protection of minorities, that recently rejected a bill to protect minorities and ban forced conversion.
Chairman and chief organiser of the protest, Samson Salamat, while addressing the rally said: “I am deeply concerned and saddened by the continuous rejection of the Forced Conversion Bill. This rejection once again showed us that the cries of the minorities are being ignored. Today we are here in the Capital city to draw the attention of the government’s parliamentary committee, and the related government officials and relevant authorities that criminal elements continue to operate with impunity in forcible abductions, rape and marriages of Christian and Hindu girls, especially in Sindh and Punjab said Salamat.
There is a dire and urgent need to stop this grave human rights violation with proper legislation along with a concrete implementation mechanism before it is too late.”
Rawadari Tehreek is committed to religious tolerance in Pakistan. A large number of people and leaders of different faiths took part in the event to support the mission of Rawadari Tehreek. Participants chanted slogans against the failure of the Pakistani justice system to act in a timely manner and to provide justice to victims and their families. People were carrying placards and banners.
They included Bishop Emeritus Mano Rumal Shah, Bishop Majeed Ashiq Naz, and representatives of various civil society organizations.
Tahir Naveed Choudhry, (chairman Pakistan Minorities alliance), Basharat Khokhar (National convener united council of Churches) Akmal Bhatti, Jamil Khokhar, Shireen Aslam, Bishop Emeritus Munawar Rumal Shah, Rubina Bhatti and some other political and religious figures also addressed the crowds.