A Christian man charged with blasphemy acquitted after 11 years 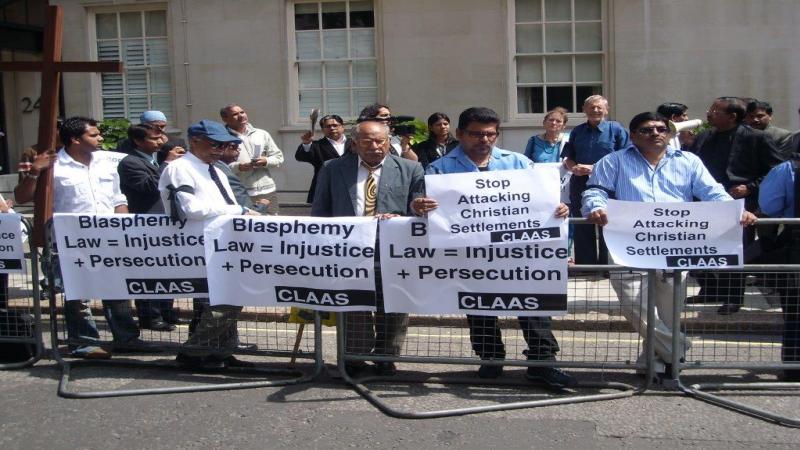 A Christian, Imran Ghafoor Masih, has been acquitted from blasphemy charges after 11 years.
Imran was arrested for blasphemy in 2009 after his neighbour falsely accused him of burning pages of the Holy Quran.
In 2010, he was sentenced to life imprisonment. His appeal hearing had been postponed almost seventy times and the case has passed through the hands of at least ten judges.
On 1 July 2009, Imran Masih (then aged 27) was cleaning the bookshop owned by his family in Hajweri town, Faisalabad.
He was gathering waste papers and old books to burn, and upon finding an Arabic textbook he consulted his Muslim neighbour, Hajji Liaquat Ali, about disposing of it.
Imran said that Ali, who owns a building materials business next door, told him that burning of that book is fine but later on he turned against him and told local Muslims that a Christian was burning the Quran and should be killed.
Ali filed a complaint at the local police station but Imran denied the allegations.
Soon news of the burning of the Holy Quran by a Christian man spread in the town and an announcement of this was made from the local mosque.
That announcement enraged people, and soon an angry mob of about 400 Muslims gathered Infront of  Imran’s house.
People were very angry and eager to stone Imran to death.
The mob dragged Imran, his brother Naveed, and father Ghafoor, from their house beating them severely and dousing them with paraffin in an effort to set them on fire.
Faisalabad police arrived at the scene and intervened, arresting Imran and taking him to the local police station.
More than one thousand Muslim extremists surrounded and stoned the police station, demanding that the police hand Imran to them and shouting, “Hang him who disgraces the Holy Quran… Christians are dogs; Imran is a dog.”
The police registered a blasphemy case against under section 295 A and B to calm down the mob and even distributed copies to them.
The situation became very tense, and Imran’s family had to flee the town while Hajji Liaqat Ali, the complainant, and his friends said they would not allow the family to live in the town or run their businesses.
Students from nearby schools who used to buy books and stationery from Imran’s shop were told by the angry Muslims not to buy goods from the blasphemer’s bookshop.
Islamists also threatened Imran’s lawyer, Rao Zafar Iqbal, but he refused to quit the case. On 27 July 2009, two people shot at him, but he escaped.
During the investigation, it emerged that some Muslims had been planning an attack on Christian houses. However, some Muslim neighbours opposed the plan and saved the Christians. These neighbours were called “infidels” for helping the Christians.
On 11 January 2010, Session Judge Raja Ghazanfar Ali, sentenced Imran to life imprisonment and fined him 100,000 rupees (€870). The court convicted him under Sections 295-A and 295-B of Pakistan’s Penal Code (wilfully insulting and desecrating the Quran) for burning Quranic verses “on purpose” to “stir up religious hatred religious feelings of Muslims”. Imran was sent to Faisalabad’s central jail and his family appealed in the High Court against the decision.
After the judgment was announced, Imran’s neighbours brought traditional drum beaters into the neighbourhood, chanted Islamic slogans and distributed sweets in the streets to celebrate what they called “the triumph of Islam”.
Imran’s family said the accusations against Imran were falsified because Ali wanted to rent the same shop that the family had rented for more than thirty years, to expand his building materials business. Ali had asked the landlady several times to vacate the shop and let it to him, but she refused. The court, however, described this as “an absurd defence”.
On 18 September 2015, Imran appeared before the Lahore High Court, and the hearing was re-scheduled for 28 October 2015. But it was postponed again and it continued to be for almost 70 more times and finally on 15 December 2020 Imran was proved innocent and acquitted by Lahore High Court.