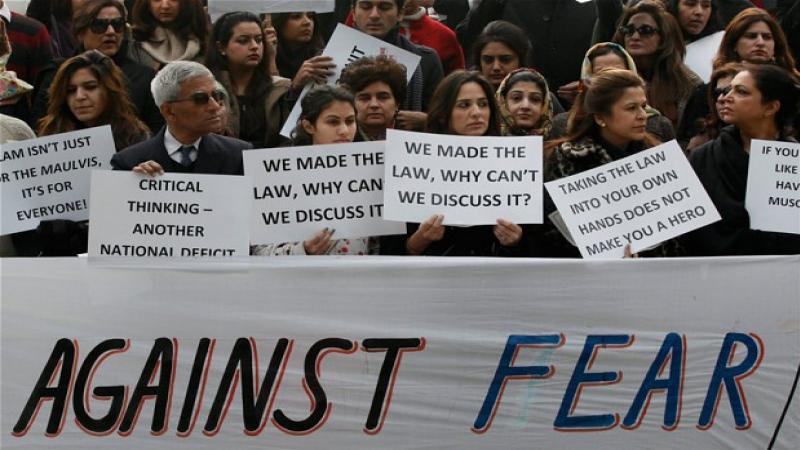 A 37-year-old Christian man has been sentenced to death by a Lahore court for sending blasphemous text messages in 2013.
The trial court took around seven years to conclude Asif Pervaiz‘s case.
According to a tweet by his lawyer, Saif-ul-malook, the court convicted Pervaiz even though there was no evidence that implicated him in the case.
Last December a court in Multan sentenced blasphemy accused Junaid Hafeez, who has been in prison for more than 6 years, to death.
He was accused of blasphemy on social media by a religious group at Bahauddin Zakriya University in Multan, where he taught.
Blasphemy cases in Pakistan:
There were at least 42 cases pertaining to blasphemy registered across Pakistan in the last month.
Most of those accused were from to the Shia community, and were booked under sections 295-A and 298 of the Pakistan Penal Code for allegedly ‘insulting the companions of Prophet Muhammad (PBUH)’.
Similarly, members of the Ahmadiyya and Christian communities are also among those accused of blasphemy.
The Human Rights Commission of Pakistan (HRCP) has said it was ‘gravely concerned’ at the recent surge in blasphemy cases being registered against sectarian and religious minorities.
It said the police must also refrain from registering blasphemy cases so promptly, when it aware that accusations are often based on personal animosity.
Last month, a man was shot dead inside in a Peshawar courtroom over blasphemy allegations that the deceased had been facing for two years.
Elsewhere, a man working as a private guard killed his colleague over an argument concerning religion.
In another case, police arrested a Christian man from the northwestern city of Nowshera on suspicion of committing blasphemy.
He was arrested after local people in Risalpure accused him of desecrating the Holy Quran.
Earlier in the year, a case against famous actress Saba Qamar and singer Bilal Saeed was registered for after they shot a music video in a Wazir Khan mosque. The clip was released online and led to large protests in Lahore in which the leaders of religious party Tehreek-i-Labbaik Pakistan (TLP) promised “vengeance” against the artists.
In the past inflammatory blasphemy accusations have sparked mob lynchings, vigilante murders, and mass protests.
According to the US Commission on International Religious Freedom, up to 80 people are known to be imprisoned in Pakistan, accused of blasphemy.
Nasir Saeed, Director CLAAS-UK said: “I am very concerned by the court’s decision to grant the death sentence to Asif Pervaiz, especially as according to his lawyer there was no evidence presented to support the blasphemy allegation against him.
“The abuse of blasphemy laws in Pakistan continues to rises. Since it is an open-ended law it can be used against anyone, therefore there is an urgent need to look into these laws and bring necessary changes to stop false allegations to settle personal scores and grudges.
“The laws are often used as a tool by extremists to stir up hatred against minorities.
“Without amendments to these laws Christians and other minorities will continue to become victims of the laws.”