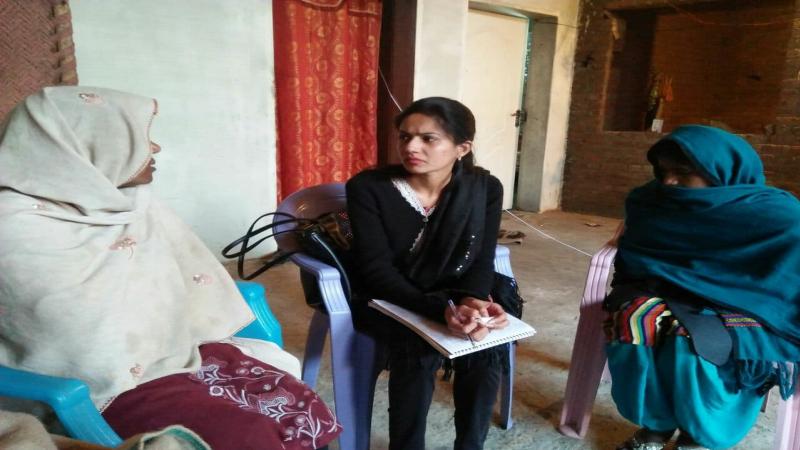 Pakistani Christian woman Mahwish, 30, who was working as a domestic servant was arrested by police on August 9 after her Muslim employer accused her of stealing 20 million rupees worth of gold and cash from his house.
Samuel Munir, Mahwish’s husband told PCN News that he is a daily wage worker and during the Covid-19 lockdown he had no work and they were suffering financially. They had no money for food for their six children - three daughters and three sons and had no but for Mahwish to take the menial job so the children did not die of hunger.
He said: “As soon as the lockdown was over, I got work and asked my wife to leave her job. But the employer requested that she continue until the end of August while they arranged for another worker.
“But on the night of August 8 the employer’s house was broken into and thieves took some jewelry and cash with them, according to the employer it was worth 20 million.”
Samuel said that on that night Mahwish was sleeping at home.
He added: “The next day, when my wife and my son Daoud (David) 11, went to work as usual they were questioned about the break-in. They were asked harsh questions and were even beaten. My wife and son were pressured to accept their involvement in the theft, and when they persistently refused, they called the police who took my wife and son Daoud to the police station in Sialkot.”
Samuel said the employer has been pressuring the police to register a case against his son and wife but during the investigations the police could not find any indication that they were involved, and after the intervention of local influential people Mahwish was presented to the superintendent of police, Amir Chaddar who also found my son and my wife innocent. They were released from police custody and allowed to go home on September 4 after being held for almost one month without any charges. While Daoud, who is only 11, was only allowed to go home on 3 September.
Samuel maintained that his wife and son were both innocent but because they are Christian and poor, the employer and police treated them so inhumanely. “Christians are not respected in this country,”. he said.
Samuel added: “My wife has been released from police custody but is still under investigation. They can call her and my son at any time for questioning. We haven’t slept and eaten for several nights since the police arrested my wife and my son. We are not feeling safe, and are praying every moment to God for justice. My father was a pastor of a Presbyterian church, therefore the only solution I know is prayer.”
Mahwish who was not in a condition to speak to Pak Christian News, briefly said that she was investigated by male officers who used to abuse her, slap her face and even beat her with their belts. Her pain could be seen on her face as she recalled the treatment.
Looking towards his wife, Samuel said: “I know my wife and son are innocent, and It will be proved. But until then we are living in fear and have no life.”
Samuel further said that Mahwish has told the police they should question and investigate the family members too and check the security cameras video. But instead, the police focusing only on her while several other people are working there and even the family members should be questioned.
Javed Raza Raymond, a senior lawyer, said the police were not supposed to keep her in their custody for so long but they were bound to present her in the court within 24 hours and then it would be up to the court to send her to judicial or physical remand.
He said: “It is very unfortunate that the police who should follow the laws, often violate the law themselves. Mahwish can complain against the police about her illegal detention and torture, she can even submit a petition in the court against the police.”
Napoleon Qayum, director of the Pak centre for Law & Justice (PCLJ) said that in 99% of such cases, allegations against domestic workers are based on false accusations and most of the time the family members are found to be involved in such burglaries. Sometimes such cases are deliberately made to blackmail the workers to force them to continue their jobs on a low wage.
He said: “Instead of investigating these cases impartially and getting justice for the victims, the police sides with the rich and influential employers.
“It is unfortunate that despite the fact that it is proudly claimed that we (Christians) have the best schools and colleges which are owned by churches and other missionary institutes, embarrassingly the majority of Christians are still illiterate because churches are using these schools and colleges to make money and not to educate or uplift Christian children.
“That is why we are still illiterate, poor, doing menial jobs and have no respect in society.  I wish the church wakes up from its slumber, realises the problem and pays attention to provide education to Christian children and help the community to come out of poverty so our next generations can live with dignity.”
He further said that although the Punjab Domestic Workers Act 2019 was passed by the Lahore High Court last January, this atrocious practice still continues in Pakistan because the implementation is always a challenge.